and the web-series: The Guild

Whenever I hear his name, I think of this scene from Family Guy: 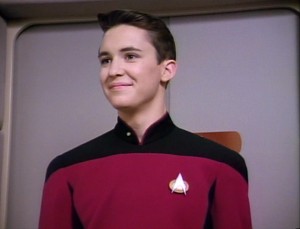 But let’s roll the clock back a little.  Let’s say from 1987 to 1990.  My young, impressionable wife (12 to 14 year old) had a tv-land crush on the one and only Ensign Wesley Crusher from Star Trek: the Next Generation.  After all, there was a lot of Wesley Crusher to love.

I’m sure there was a “some day I’ll marry Wesley Crusher” in there – but lucky for me I can compete against fictitious characters millions of light years away.  Anyhoo…

My wife and I are both pretty geeky 🙂 and even though it was a bit of a drive, I got tickets to go to Phoenix Comicon.  If you’ve never been to one, they’re a blast!  This one had the whole cast of Star Trek: The Next Generation and many from the original Star Trek.  Did she want to see Shatner?  Patrick Stewart? No, she was most excited to meet the man himself: Wil Wheaton (please refer to the Family Guy video above).

As a surprise, I purchased the photo opp with Wil Wheaton ahead of time.

Now, I know what’ you’re thinking – she met him and turned into a fangirl, crying on the spot.  Not at all.  The crying began on the drive up.

How Wil Wheaton Made My Wife Cry

Most of you know my wife is writer.  She has over 40 books published and 8 more contracted to be released through 2015.  All of you know it isn’t easy being a writer.  It has serious ups and downs.  When the downs are at their worst, it makes you feel selfish about what you’re doing, doubt that it’s worth it, and feel like a complete failure.  As I meet and work with more authors, I know it’s all part of the journey, but it’s hard to see that in the middle of it.

She had purchased Wil’s book: Just a Geek

on her kindle, but hadn’t had time to read it.  So while we were driving up to the comicon, she starting sobbing.  It wasn’t pretty sobbing either.  It was one notch below that really terrible ugly cry.  And it was all because of Wil Wheaton.

In his book, Wil talks about his journey.   Success at a young age – then struggling to get by and find a job.  Wondering if it’s all worth it.  Wanting to quit.  Wanting to just give up.

I have not yet met an author that doesn’t encounter this same set of feelings at some point in their career.  Even for authors that have some early success, there is even more pressure on subsequent releases.  It’s an industry that beats you up.  It chews up and spits out many good authors and quite a few give up on their dream because of it.

The reason it made her cry is because the Journey has been so similar to hers.  I’m glad to say that Wil shows the light at the end of the tunnel.  So we get to comic con, attend some sessions, meet some very talented writers and artists, and she got her picture taken with Wil: 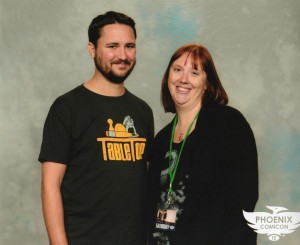 I wasn’t there when they spoke, but my non-court admissible hearsay was that Wil was amazingly nice and told her to keep at it and never give up – no matter how hard the journey is.

To writers/actors/ and other creatives reading this – follow Wil’s and stick with it! It can be difficult, but enjoy the journey when you can and keep working to make your dreams come true.

Update:  For those asking for details about the love of my life, my wife has been writing professionally for 10 years under the pen names Jess Michaels/Jenna Petersen for historical romance/erotic historical romance and Jesse Petersen for urban fantasy (zombies, monsters, and other things that go bump in the night).

Posted in Featured, Other (The Kitchen Sink).