or 5 things everyone can learn about marketing their books 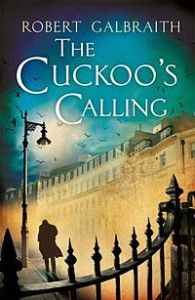 The Cuckoo’s Calling by Robert Galbraith AKA JK Rowling

I’m sure just about everyone has seen the news about JK Rowling’s book:  The Cuckoo’s Calling.  She published it under the name of “debut author” Robert Galbraith in April 2013.

To be clear, I really like JK Rowling and her writing. I’ve seen a bunch of articles about the recent announcement and the thing that sticks out in my mind is the marketing aspect.

According to the wikipedia article, in the 3 months since it released – it sold… 1500 hardcover copies and 7000 ebooks. These are decent numbers, but far from the bestseller status she or the publisher wanted.  After revealing Rowling wrote the book, the book jumped to #1 on both Amazon and Barnes and Noble – plus the publisher ordered 140,000 additional print copies to be printed to meet the demand.

Before it was leaked that Rowling wrote the book…it had a cover quote from Val Mcdermid (plus endorsements from other crime writers), a review in Publisher’s Weekly, and a columnist at the Sunday Times read it – (that eventually got the tweet that started the investigation into the identity of Galbraith). Every author should be so lucky 🙂 there was clearly a publicist at work – or at least the publisher pulled a few strings.

What I want to illustrate here is that even with this help, the made up person was missing a few things.  Robert Galbraith had a website and some reviews.  No Twitter.  No Facebook.  No newsletter.  No connection with real readers.  In short, no author platform.

Perhaps I’m getting a little ahead of myself 🙂

Here are 5 things everyone could learn from this situation:

One last thought: sooner or later, every author hurts.  Half the articles speculated that Rowling leaked the news herself or planned the leak to boost sales (since the second print run jumped to 140,000 copies and she’ll likely hit the NYT bestseller list).  I’ve worked with lots of authors – big names, mid-list, and just starting out.  Every book is full of hope.  Every author feels it at some time.  It could be the beginning, the middle, or the end – but very few have a charmed publishing career.  I’d wager Rowling wasn’t satisfied with how the book was performing.  Perhaps she didn’t expect the sales of Harry Potter, but it wasn’t anywhere close to previous success. Whatever the reason, Rowling had an established name to fall back on. Other authors need a platform.

Posted in Other (The Kitchen Sink).