I know you’re wondering how a week of marketing on Facebook did for me.  The bottom line, it was decent for the amount of time I put into it.  I want this to be the overall lesson:

When you don’t have a lot of time, you can still make connections with REAL people.  EVERY week it will build on itself and you’ll be amazed what happens over weeks/months/years.

Let me start this by saying I spent approximately 2 hours total (counting 30+ minutes on the “ugly” section below).  I didn’t have any amazing content or posts to share.

I primarily used the  strategy outlined in my post on using your personal page to get likes – which is to join groups, comment, and interact.  During the week, I posted about 3 times and responded to about 10 posts.

In my personal account, I’m now up to 134 friends, so I also added about 65 people to it. That’s ok, but the real fireworks were on my fan page which is where I wanted it.

Once you get to 30 likes on your fan page, you get access to “Insights” which gives you a lot of good data such as: 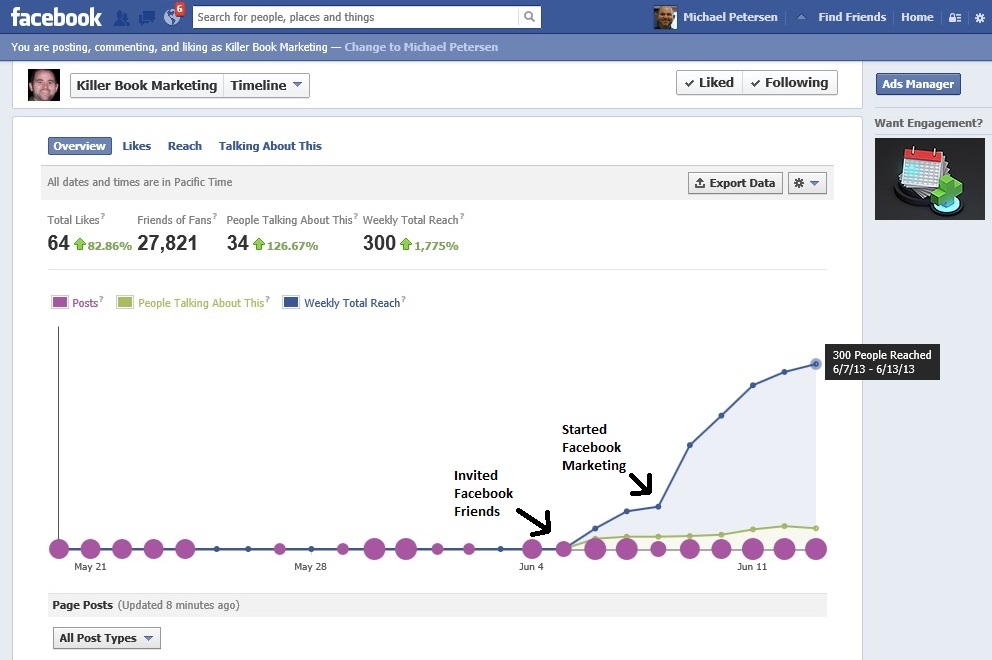 Time.  There’s never enough of it.  I know as an author, you’ll have many weeks like this.  Do what I did – just interact when you can.  If you can only do one post or response, that has to be enough some days.

Friending too Fast:  As I interact with people, I send them a Facebook friend invite. I do my best not to send random invites but sometimes people don’t realize who you are or even know if you’ve responded to something.  I’m pretty sure that someone I interacted with clicked “I don’t know this person” – and since Facebook is making there rules more strict about invites, I got a message from them warning me to make sure I really know them before sending an invite.  The goal is not to be a spammer – but to make real connections with people that might be interested in your book.

Someone didn’t like one of my responses in a Facebook group (the response was about connecting with real people in Twitter).  Turned out he was an advocate of spamming and wanted to sell his $28 “niche marketing” ebook (47 pages) to authors.  It’s clear that I was very threatening to him which is probably why he went after me in the group.

I’m only human 🙂 and I have a huge pet peeve of seeing authors ripped off because they don’t know any better.  I responded a couple times trying to explain the importance of an author platform and connecting with people – when I should have just ignored it.

Many lessons for me here: This probably wasted 30 minutes of my already limited time for the week,  I don’t want to be associated with spammers in any way, and ultimately, authors need to decide for themselves.

Posted in Facebook, Marketing, Techniques to Market This Site.