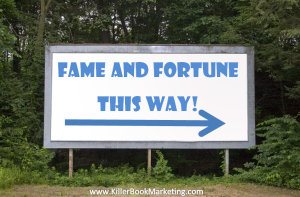 What is an Author Platform?

The term “platform” can be confusing – simply put – it’s anything that helps you connect with potential readers over time.  The way I think of it – if you’re in a crowded area and stand on your platform – how many people would see you?  How many people would hear what you have to say?  How many would be receptive to what you’re saying?

Here’s the real trick.  Some people already have a “platform” before they even start.  Kanye West has millions of followers on Twitter even though he only has a handful of tweets.  Bill Clinton can get a book deal and sell  thousands of books…because he is already famous. Snooki can have a book (well, 3 books actually) because she’s on TV.  I’m not trying to diminish anything that

Looking for more detail?  I think Jane Friedman’s article: A Definition of an Author Platform does a great job at breaking down the aspects of

Why don’t big authors like Danielle Steele/Nora Roberts/Stephen King/JK Rowling/<insert famous author name> have to build a platform?  They seem to be doing well without one.

However they got to where they are, they are already famous.  They could break every publishing rule.  A book with a brown paper cover called “My latest book” in an unreadable font by Stephen King would hit bestseller lists.  I’m not kidding.  Mr. King, please do this to help me prove the point.

On a side note, I wrote an article about JK Rowling called: “JK Rowling and the missing author platform” about what happens when she walks away from her brand and tries to do it without a platform 🙂  Check it out if you have a minute!

EL James hit the big lists without a platform – Can’t I do the same?

Don’t let anyone fool you.  EL James had been building a platform for a couple of years before publishing her book — on fan fiction sites.  She had large numbers of Twilight readers wanting something more…and then drove excitement onto Goodreads.  The interesting thing that happened was that it started to take a viral jump beyond its Twilight fan fiction origins.

I would say that the platform drove the initial success and that the momentum grew on itself.  The books have huge amounts of hype that are still driving sales today.

Yes, but do I really need a platform?

Some non-fiction authors or single book authors don’t use  platforms… they usually use “niche” marketing where they target their niche.  It’s  short term tactic that isn’t intended to sell multiple books over time.  It generally helps sell a single book.  If you have a second or third book come out (without a platform) you must reinvent the wheel and try to connect with them again and get them to buy again.

When I look at the hundreds of thousands of sales my wife has made, I see this as the biggest error in the last 10 years of her career.  What if we had done a better job at collecting email addresses or getting people to connect on Facebook?  My wife has done quite well but I believe her trajectory would be very different.

If you only have one book (and are not planning on writing another one) or have a limited niche, you may not need a platform.  If you are/plan to be a career author that writes two or more books a year, a platform will help you build readership and sales over time.  It’s not about selling a single book!  It’s about getting a reader hooked and buying the current release, your backlist, and pre-ordering your next book.

Don’t try to be everywhere.  It will kill you and you’ll spin your wheels more than you’ll make forward progress.  Find where your audience is and focus there.  Let me give some examples:

There is no absolute answer – and you’ll see authors do different things to find an audience.  So look around and figure out where potential fans may be!  Don’t try to be everywhere – just focus on a few main places where you know you can connect with real readers.

I worked my butt off on my platform and haven’t had much success. Does this get easier?

A platform can be hard work.  It takes time to build a readership.  The fact is that a whole year may only equal a few hundred sales.  Ouch.  That hurts.  There can be lots of days that can feel like you’re not making much progress.  However, now that I’ve depressed everyone, I’ll try to turn it around.

Think about this – when you start out and get connected to 100 people, one or two people might share or comment on a post.  When it’s  thousand, it is often more than 10.  When it’s a few thousand – it can be more than 50!  As others comment and share – their friends see the posts and are more likely to connect with you.  Without you doing much, you can suddenly get hundreds of new followers.